A New Era Begins at JFCS 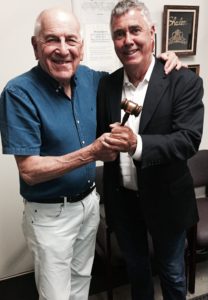 Stephen Seidensticker to be Officially Named JFCS Board Chairman

On Friday, October 7th JFCS will host their Annual Meeting and Volunteer & Donor Recognition Brunch. This year’s ceremony will carry special significance as Joe Mendels will step down as JFCS’s board chair. “Joe Mendels’ passion, dedication, and unwavering commitment to help others is undeniable” said Rose Chapman, President and CEO of JFCS. “His dedication and leadership has moved JFCS forward, allowing us to continue to empower those in need.”

Mendels will be ‘passing the gavel’ to 3 year JFCS Board Member and founder and CEO of Tableseide Restaurant Group, Stephen Seidensticker.  “It is an honor and a privilege to have the opportunity to work with such a compassionate and dedicated board and staff,” said Seidensticker. “I look forward to progressing the mission of JFCS.”

As a founder and CEO of Tableseide Restaurant Group, Steve maintains full responsibility for operations and strategic direction of large, upscale dining venues in Sarasota. These include Libby’s Café + Bar, Louies Modern, Muse at the Ringling, The Francis, Banyan Café, and Oak & Stone. Prior to launching Tableseide in 2008, Steve held increasingly responsible management and ownership positions at the Gasparilla Inn in Boca Grande, Williams Island private community, the Annapolis Yacht Club, and various other Florida resorts. Throughout his career, he has recognized the synergy between business, a thriving community, and public service.

Speaking of his predecessor, Joe Mendels said, “Steve Seidensticker’s leadership role in the Sarasota community, his passion for social justice and his great interpersonal skills make him a natural leader to advance the work of an organization that plays a central role in making this a better place for everyone to live in.”

“Each board chair brings a unique set of skills to the position,” said President/CEO Rose Chapman. “I look forward to working with Steve and benefiting from his business know-how to continue to strengthen and grow JFCS as a leading social service organization serving all people in our community.”

You Can Help JFCS

Help us empower individuals, strengthen families, and guide members of our community toward self-sufficiency.

JFCS Can Help You

We can provide immediate solutions for your unique situation through one of our many services or programs.